Fast-Food For Kids: The Restaurant Meals With The Most Calories 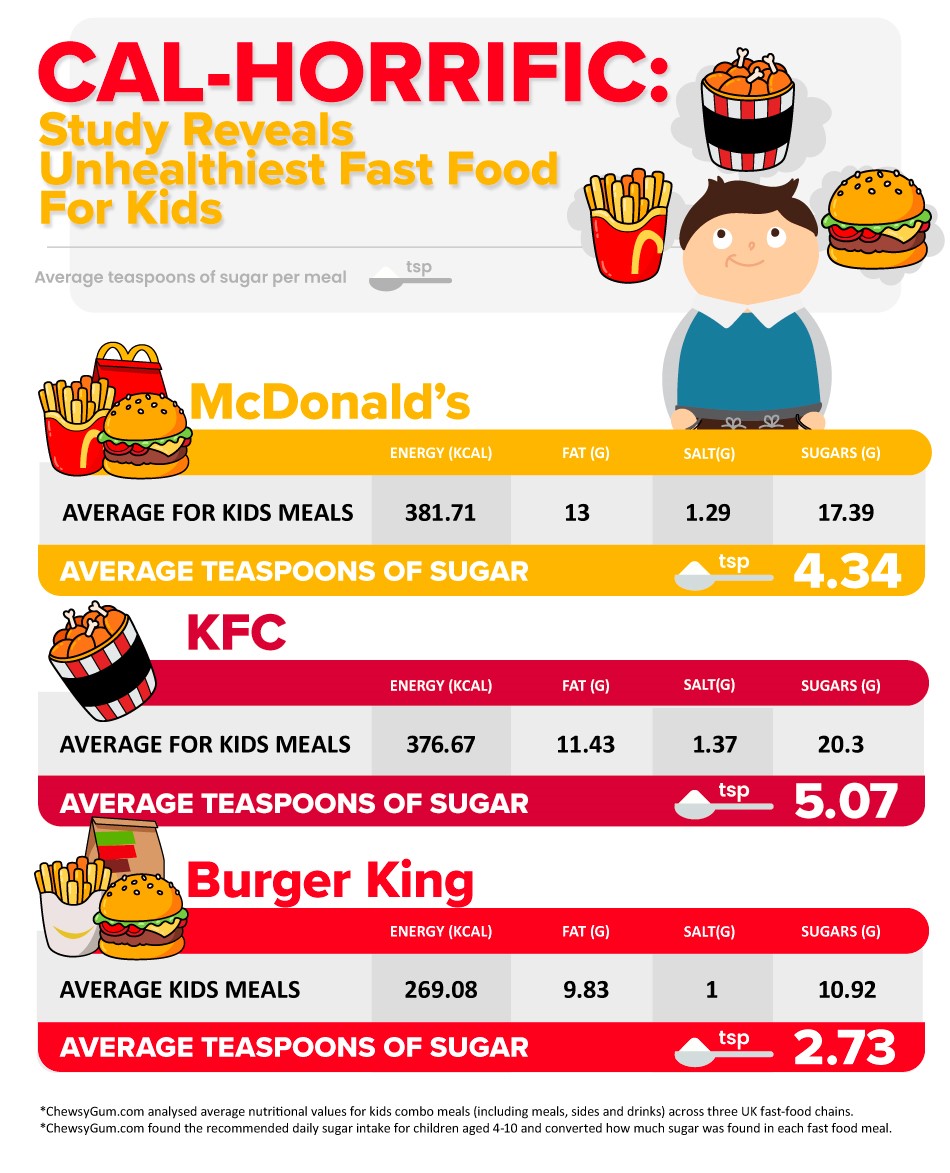 Recent headlines highlight how obesity in adults and children is continuing to spiral out of control. According to data from the National Statistics publication of National Child Measurement Programme, 40.3% of UK children in year 6 are obese. This led experts at Chewsgum.com to compare three of the leading UK fast-food chains (KFC, McDonald’s, and Burger King) to see which meals are the most calorific for children. Chewsy collected the data by analysing the nutritional information provided by each fast-food chain on their website and averaging the sugar, salt, calorie, and fat intake per main meal option, as well as sides and drinks where provided.

With a variety of meals, sides, and drink options to choose from, McDonald’s knocks KFC off the top with a calorie average per ‘Happy Meal’ of 381.71 KCALs.

Burger King, however, has the lowest average calories for all main meals considered, as their children’s meal average is only 269.08 KCALs per serving.

McDonald’s has, not only the highest calorific average but also the highest fat content, with 13 grams of fat per serving.

Coming in second, is none-other than KFC’s Colonel Sanders himself at 11.43 grams of fat per serving, only 1.57 grams lower than its rival, McDonald’s.

Finally, Burger King shows the lowest grams of fat per serving (9.83). Across all the three chosen fast-food chains Burger King is the lowest for all four content averages (calories, fat, sugars, and salt).

SUGAR Chewsy found that out of the three selected fast-food chains, KFC exceeds (20.3 grams) the daily sugar intake of children between the ages of 4 and 6 (19 grams) by 6.8%. KFC also comes close to exceeding the daily intake for children between 7 and 10 (24 grams).

McDonald’s has an average of 4 teaspoons of sugar in their ‘Happy Meals’. They nearly hit the daily sugar intake for children between the ages of 4 to 6 by serving 17.39 grams of sugar on average in each meal.

Out of the three fast-food chains Burger King serves almost half of KFC’s sugar average. Burger King stands at 10.92 grams of sugar, 9.38 grams less than KFC and nearly half the number of teaspoons compared to McDonald’s.

Not only is KFC holding the title for the highest sugar content, but they also hold the highest salt average (1.37 grams). KFC’s average meal constitutes 45.7% and 27.4% of the daily average of salt for 4 to 6-years olds (3 grams) and 7 to 10-year olds (5 grams), respectively.

Following closely behind, McDonald’s stands at 1.29 grams of salt per serving, 0.08 grams lower than KFC.

Again, remaining the lowest of the three fast-food chains is Burger King, with an average of 1 gram of salt per meal serving.

A Chewsy spokesperson has commented on the findings:

“There has always been an obesity problem within the UK and now due to the restaurant and fast food prices being slashed, due to the Eat Out to Help Out scheme, parents may be more willing to spend on meal options that are not necessarily healthy for their children. Our research highlights that it's especially shocking to see that McDonald’s has the highest daily average calorie intake which should be only 1,530 - 1,649 for children aged 7. It's clear more needs to be done to get to the real root of childhood obesity. Perhaps overseeing how fast-food restaurants develop children's meals in compliance with government/NHS nutritional guidelines will ensure that parents remain more vigilant when choosing the meals their children eat. As fast food is still a cheap option for parents, it seems it's the responsibility of the brand to carefully select meals that are more nutritious and less calorific.”

1. Chewsy looked at nutritional information from McDonald's, KFC, and Burger King. Specifically, they focused on calories, fat, salt, and sugars.

2. The average calories, fat, salt, and sugars were found by adding the meals, sides, and drinks together and diving the total by the number of items offered.

3. Across all three fast-food chains, Chewsygum extracted data for 'sugars' and 'carbohydrate sugars' which are the same. Burger King was the only restaurant to stipulate 'fat sugars' as well as 'carbohydrate sugars'. However, according to nutritional experts, fat sugars don't exist, and to maintain consistency and credibility, Chewsygum used sugars only.

4. Chewsy added sides and drinks to McDonald’s main meals to provide averages, whilst Burger King and KFC already had a set menu.


Packaging Today is a product of NSM, NSM is a trading name of NS Media Group Ltd Registered in England and Wales No: 06339167 Registered Office: 40-42 Hatton Garden, London, England, EC1N 8EB, UK, VAT Reg No: GB 338 4605 89. © 2020, All Rights Reserved.
Privacy Policy
We have updated our privacy policy. In the latest update it explains what cookies are and how we use them on our site. To learn more about cookies and their benefits, please view our privacy policy. Please be aware that parts of this site will not function correctly if you disable cookies. By continuing to use this site, you consent to our use of cookies in accordance with our privacy policy unless you have disabled them.