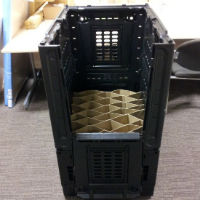 Lincolnshire, UK-based Branston had identified a problem with the in-store packing of packs of baby potatoes, caused by the overloading of packs in display trays leading to the spoilage of a large amount of the potatoes at the bottom of the pile.

The solution developed by Envirolite – part of the Dufaylite Group of sustainable packaging companies – is the expanding Void Former.

Designed to fit at the base of the crate, the Void Former expands to raise the bottom of the crate by approximately 3cm, meaning that the crates cannot be overfilled when packed, according to the company.

“The packaging solution for Branston has been designed to be moisture resistant, whilst also having all the other fantastic Envirolite properties, such as being 100% recyclable, extremely strong, compact and lightweight,” Envirolite says.

As well as its on-going relationship with Branston, Envirolite is also now providing the same packaging solution to potato suppliers Greenvale and The Kent Potato Company.


Packaging Today is a product of NSM, NSM is a trading name of NS Media Group Ltd Registered in England and Wales No: 06339167 Registered Office: 40-42 Hatton Garden, London, England, EC1N 8EB, UK, VAT Reg No: GB 338 4605 89. © 2020, All Rights Reserved.
Privacy Policy
We have updated our privacy policy. In the latest update it explains what cookies are and how we use them on our site. To learn more about cookies and their benefits, please view our privacy policy. Please be aware that parts of this site will not function correctly if you disable cookies. By continuing to use this site, you consent to our use of cookies in accordance with our privacy policy unless you have disabled them.